Online variations on the Scottish Gaelic for ‘Prime Minister’

Taylor Strickland is a poet and translator from the US. His poetry has appeared, or is forthcoming, in New Statesman, the TLS, Poetry Review and various other outlets. Commonplace Book, his debut pamphlet, is forthcoming from Broken Sleep Books. A doctoral candidate in literary translation at the University of Glasgow, he lives in Glasgow.

I can’t describe the sound but it’s abrasive,
a kind of grating, a sort of rubbing from below.
But it’s clear where it comes from: way down
in the deep trench of crooks, narrow conduit
of swindlers, the well-cut ha-ha of hoodlums.

It’s a scouring that rises up from the trough
of brigands, dyke of looters, fleet of muggers.
This scratching of criminal collusion, a noise
of raiders in drains, marauders in gullies and
pirates in gutters. It grinds on the drum, invades

like a villainous earworm with its jarring of
pickpockets in fosses and poachers in moats,
coy dacoits in empty ducts. It’s a feint rumbling
of robbers that travels through the murky waters
of a fleet. Not a bugle of bandits and burglars

soaking in a sap, more the loud, syncopated sound
of shoplifters lifting in a straight watercourse,
armed highwaymen with their foreign haul
hunkered down in a drained channel, squatting.
Listen, put your ear to the ground, can you hear it?

Paul Stephenson has published three pamphlets: Those People (Smith/Doorstop, 2015), which won the Poetry Business pamphlet competition; The Days that Followed Paris (HappenStance, 2016), written after the November 2015 terrorist attacks; and Selfie with Waterlilies (Paper Swans Press, 2017). He co-curates Poetry in Aldeburgh and lives between Cambridge and Brussels. His debut collection is due in 2023. Website: paulstep.com / twitter: @stephenson_pj / instagram: paulstep456

An avid listener of Radio 4, Finola Scott spends her life shouting at the radio as well as performing all over the country – on the Glasgow Subway, at the Edinburgh Book Festival, in Swimming Baths and in the Scottish Parliament. They can be read in her pamphlets, in anthologies, on posters, tapestries and postcards, as well at her Facebook page Finola Scott Poems.

Your Country Needs You!

We answered the Government’s call to keep

Tut-tutted at having to Zoom from our laptops

to queue for a latte.

We made billions during the pandemic.

We thank the Government Ministers,

our Head Boys, for that.

Owen Gallagher is a working-class writer, born in Gorbals, Glasgow. He left school at 15 and worked in factories and on building sites, also as a street-sweeper and bus conductor. His most recent publication is: Clydebuilt (Smokestack Books 2019) which was shortlisted for The Scottish Poetry Book of The Year in 2021.

Let’s just move on, for this amiable bluffer
Was born to drink wine while the hoi polloi suffer.
The voters? The voters? They like it rougher;
It gives them more character, makes them all tougher.
Eton and Bullingdon – these are his buffer
Ensuring he gives not a hoot nor a stuff; a
Nice piece of work, is this huffer and puffer.
And if the electorate hollers ‘Enough!’, a
Replacement will come, and one even duffer.

David Birkett was born 1961 in Malta, but schooled and raised in England. He is a member of the North Herts stanza of the Poetry Society, PoetryID.

Kate Noakes‘ eighth collection, Goldhawk Road, will be published by Two Rivers Press in 2023. She lives in London where she is working on her PhD on breath in contemporary British and American poetry.


Penelope Shuttle lives in Cornwall. Her thirteenth collection, Lyonesse, appeared from Bloodaxe in June 2021, and was Observer Poetry Book of the Month for July 21. Covid/Corvid, a pamphlet written in collaboration with Alyson Hallett, appeared from Broken Sleep Books, September 2021. Father Lear, a pamphlet, was published by Poetry Salzburg in June 2020. Shuttle is President of the Falmouth Poetry Group, founded in 1972 by her late husband, Peter Redgrove. She is a Hawthornden Fellow, and received a Cholmondeley Award in 2017.

The concluding sequence of pages from Sophie’s ‘Lilac Fairy’ collage chapbook. See and hear Sophie read through at https://www.youtube.com/watch?v=usFfVf3Ie6w 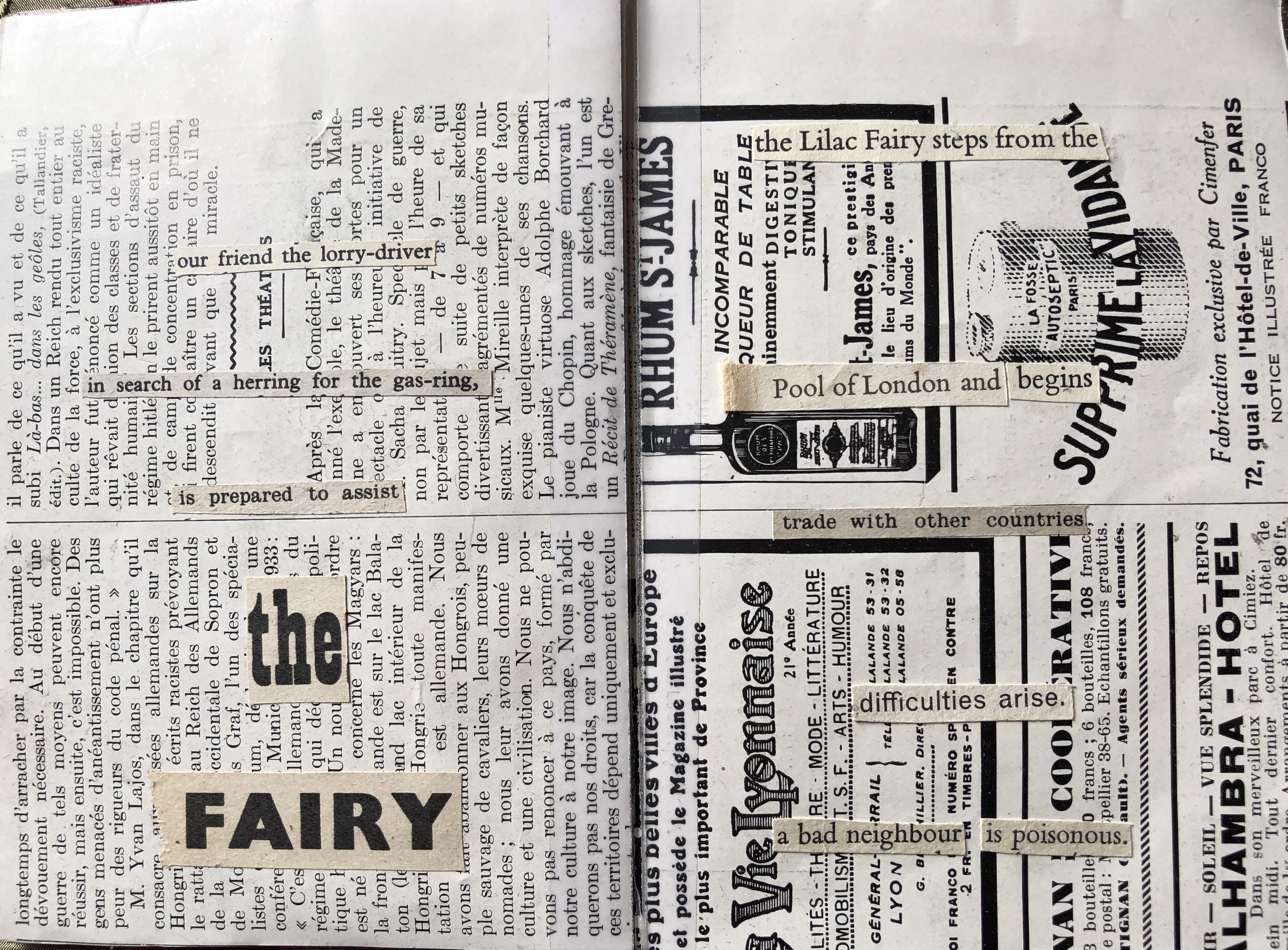 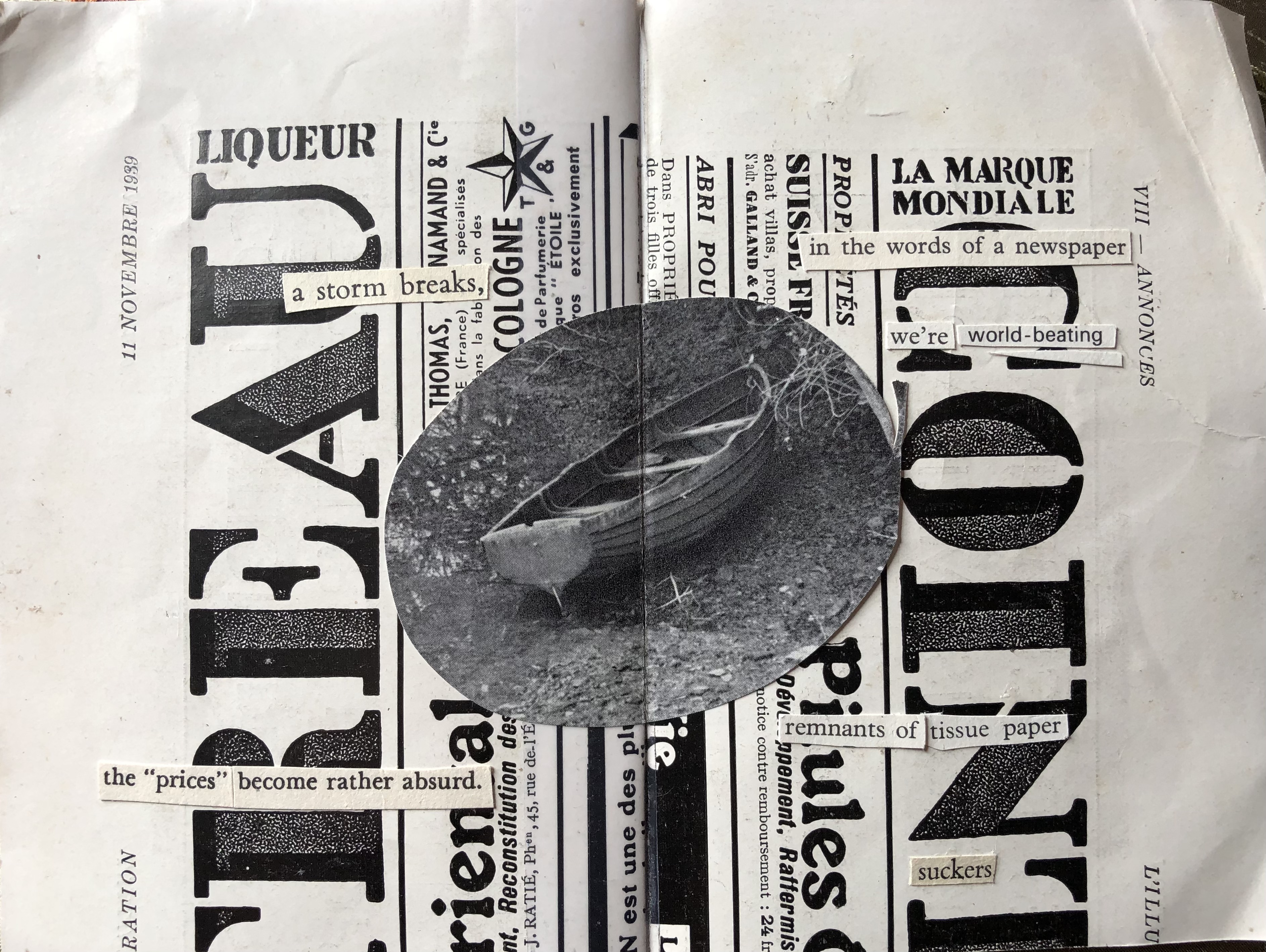 These pages also appear in Sophie’s video read-through at https://www.youtube.com/watch?v=usFfVf3Ie6w

The Coffin of Democracy

A nail for the times we find ourselves in:
post-truth, post-decency, post-shame.

A nail for the lie on the side of a bus.
A nail apiece for the lies at despatch box,

podium, in front of cameras, the lies
told to foment the crowds. A nail

for each denial of wrongdoing. A nail
for each headline taking his side.

A nail apiece for the bullish refusals
to do the right thing and resign. A nail

for every blowhard insistence
there’s a job to do and a need to move on.

A nail for every frontbench smirk. For every
transaction behind closed doors.

For every MP who enables
the hammering in of these dozens,

these hundreds, these uncountable nails.
A nail for the rule book torn to shreds.


Neil Fulwood was born in 1972 and is still alive. He lives in Nottingham and works as a bus driver. He has published four collections and two pamphlets with various presses.

In the period leading up to the appointment of a new leader of the Conservative Party and therefore Prime Minister, New Boots is inviting reflections on the current incumbent, Boris Johnson. Poems selected will appear as ever in the main space to the left, which is a statement open to metaphoric interpretation.

Can you believe it’s been two long years since, exhausted by relentless bad news, we mothballed New Boots and Pantisocracies and took up fishing, never to catch anything but Covid from that day to this? We certainly can. Don’t get us started on January the 6th or Vlad the Invader…

However, short of a badly-organised coup (and we’re not putting that past him), it’s looking like the venal and labyrinthine political events of the last several months will lead to the passing of the premiership of Alexander Boris de Pfeffel Johnson and his replacement by one of two partly successful necromantic resurrections of Thatcher in the form of Truss or Sunak.

We, waking from uneasy dreams here under the mountain at Schloss Neubootzenstein with Thomas the Rhymer and his crew of blockheads, feel that neither of these momentous occurrences should go unremarked upon by the literary community, whatever that is. We therefore invite your poetic responses for consideration by the editors to go into our DePfeffelschrift.

Please email your work to gudeandgodlie@gmail.com by 21st August at the latest and we’ll publish the best of what we receive in the leadup to the succession on September 5th. If that doesn’t work we’ll publish the worst. Remember the words of Harold Wilson – a week is a long time in politics, and a month is even shorter. So stop reading this and start writing!

This site is maintained by self-appointed voluntary arts drones working on zero hours non-contracts. Therefore unless we specifically say so we simply can’t process unsolicited work, and will tend to proceed by invitations. We hope we’ve got enough sense to ask *you* for a contribution, but please don’t be offended if we’re so stupid, tired, or disempowered that we haven’t approached you yet.