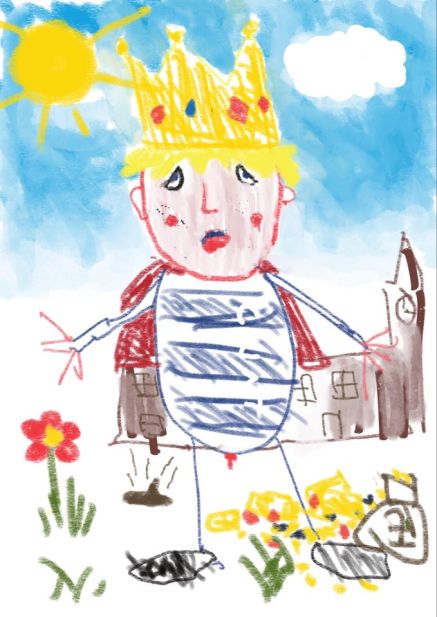 He is a child’s drawing of authority,

with a wonky three-baubled crown clapped

of unconvincing hair scratched as an

afterthought over a savage grill mouth

His body is a fly’s blue abdomen;

The artist has added the cape of a court

fool, or a washed-up superhero, and piles

of jewels rendered as multicoloured daubs

and bullion and coin drawn in the same

yellow as crown and hair. His whole world

is encompassed on this sheet of sugar paper.

He is a true and certified copy of himself.

No photograph could do more justice to its

Tim Turnbull has been performing his poetry, at home and abroad, for over twenty five years. His first full collection, Stranded in Sub-Atomica, was published by Donut Press in 2005. His latest is Avanti! from Red Squirrel Press. He has created stage shows, toured with slam teams, published in numerous anthologies and magazines, written supernatural fiction, and also paints and draws.

In the period leading up to the appointment of a new leader of the Conservative Party and therefore Prime Minister, New Boots is inviting reflections on the current incumbent, Boris Johnson. Poems selected will appear as ever in the main space to the left, which is a statement open to metaphoric interpretation.

Can you believe it’s been two long years since, exhausted by relentless bad news, we mothballed New Boots and Pantisocracies and took up fishing, never to catch anything but Covid from that day to this? We certainly can. Don’t get us started on January the 6th or Vlad the Invader…

However, short of a badly-organised coup (and we’re not putting that past him), it’s looking like the venal and labyrinthine political events of the last several months will lead to the passing of the premiership of Alexander Boris de Pfeffel Johnson and his replacement by one of two partly successful necromantic resurrections of Thatcher in the form of Truss or Sunak.

We, waking from uneasy dreams here under the mountain at Schloss Neubootzenstein with Thomas the Rhymer and his crew of blockheads, feel that neither of these momentous occurrences should go unremarked upon by the literary community, whatever that is. We therefore invite your poetic responses for consideration by the editors to go into our DePfeffelschrift.

Please email your work to gudeandgodlie@gmail.com by 21st August at the latest and we’ll publish the best of what we receive in the leadup to the succession on September 5th. If that doesn’t work we’ll publish the worst. Remember the words of Harold Wilson – a week is a long time in politics, and a month is even shorter. So stop reading this and start writing!

This site is maintained by self-appointed voluntary arts drones working on zero hours non-contracts. Therefore unless we specifically say so we simply can’t process unsolicited work, and will tend to proceed by invitations. We hope we’ve got enough sense to ask *you* for a contribution, but please don’t be offended if we’re so stupid, tired, or disempowered that we haven’t approached you yet.